The Gozo Regional Council has condemned the attack on Qala Mayor Paul Buttigieg.

Buttigieg filed a police report on Tuesday saying he was attacked by an employee of a “well-known Gozitan developer.”

He was with workers supervising clean-up work in his locality when he was allegedly attacked. 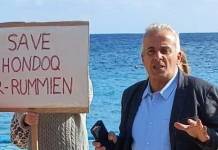 “A truck driver rushed out of a truck and physically assaulted me, yelling at me and saying, ‘Int imqabbad magħna’ [You are picking on us]“, he said on Facebook.

In a statement, the President of the Gozo Regional Council, Samuel Azzopardi, and its members condemned the incident.

“The Gozo Regional Council condemns any type of violence while reiterating increased dialogue between mayors and developers in good faith if Gozo is to be spared from excessive development and environmental and urban degradation,” the statement read.

The council added that the most favorable solution for the benefit of all is to prioritize sustainable development over anything else.

The incident was also condemned by the local council of Qala.

In a statement on Wednesday, the council said it happened in front of two of its employees.

“In a democratic state where people enjoy freedom of expression; Council understands that often there will be differing opinions. While the council encourages a respectful dialogue between opposing points of view; we can never accept aggression or violence,” the statement read.

The council said it looks forward to the conclusion of the investigations by the relevant authorities and that justice is done.

BE THE FIRST TO RECEIVE THE LATEST NEWS