Good afternoon, news: Joey Gibson will be tried, Shark of the Skies and ThiccBoi left too soon – Blogtown

The Mercury provides news and fun every day, but your help is essential. If you think Portland benefits from smart local journalism and artistic coverage, please consider making a small monthly contribution, because without you there is no us. Thanks for your help! 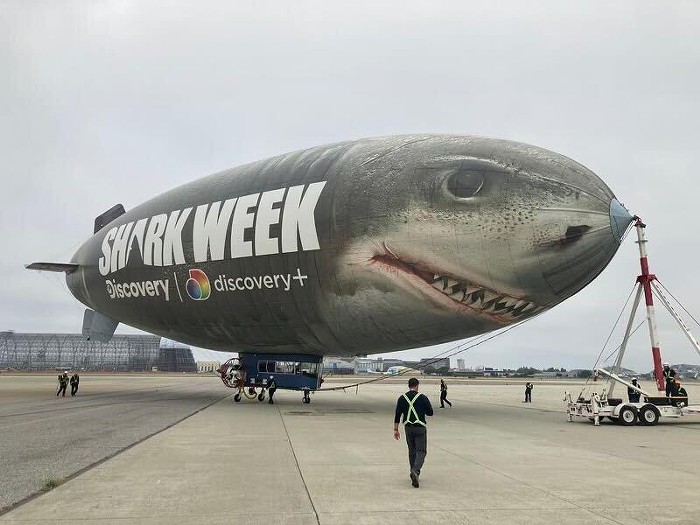 This weekend, the sky above your head could contain a giant shark…airship. courtesy of discovery

Good afternoon, Portland! We’re looking at a delightful weekend of reasonable 80 degree days and crisp, cool evenings. Monday will be 93 years, so I’m going to turn around, Cronenberg style. But it’s also the first day of NACHO WEEK– and maybe I’ll be convinced to go back to the good side for tasty totchos.

IN THE LOCAL NEWS:

• Patriot Prayer founder Joey Gibson will eventually stand trial on rioting charges, linked to his leading members of his right-wing organization to incite a street fight at the now defunct northeastern Cider Riot bar. east of Portland on May 1, 2019. It has been three years since the chaos of that day so Mercury Editor-in-chief Alex Zielinski has the reminder.

• This weekend, the sky above your head could contain a giant shark…airship. The discovery chain plans to fly a 179-foot-long Shark Week airship over Portland and other Pacific Northwest cities, such as Eugene, Salem and Medford. You’re most likely to catch its toothy majesty over Portland on Saturday July 9 and Sunday July 10.

• The Fuji to Hood Festival pairs Oregon breweries with Japanese brewers to craft craft beers from each region’s most treasured ingredients. Find out how the festival started and what the brewers have come up with this year:

Superb piece of @yager on Fuji to Hood Fest, which started in an Oregon Brewers tent and has since morphed into a cross-cultural exchange that alternates between Oregon and Japan each year. https://t.co/Y3Lw5bDIcd
— Suzette Smith (@suzettesmith) July 8, 2022

• So many things happened in the gastronomic world of Portland this week! A classical music-themed bar has opened in northern Mississippi, ThiccBoi has closed – after recently reopening at Metalwood Salvage – and we’ve said goodbye to the long-running French confectionery and tapas spot Pix Pastry. But the word is that the vending machine remains.

IN THE NATIONAL / INTERNATIONAL NEWS:

• Today, President Biden signed a decree pledging that his administration will work to protect the safety of those who request and provide abortions. He asked his Secretary of Health and Human Services to develop a report on how to possibly protect abortion access and asked the Federal Trade Commission Chairman to think about privacy consumers seeking reproductive care. That’s… not much, but signals resistance to inevitable legislation that would seek to criminalize US residents seeking health care.

• A statement filed with the US Securities & Exchange Commission suggests that Elon Musk bailed out on its $44 billion deal to buy the social media site. “You didn’t have to interrupt me / Act like nothing happened / And we were nothing,” Twitter didn’t say. Musk’s team blamed the billionaire/platform breakup on Twitter being the withholding of information.

• Speaking of how bad Twitter is, a number of jokes posted about the assassination of former Prime Minister Shinzo Abe led by right-wing French politician Damien Rieu login by mistake developer Hideo Kojima (Death Stranding, Solid metal gear) as an assassin. He is not.

• Finally, to understand the Top 5 hottest birds in the skyyou must first understand that all birds are cheerful: